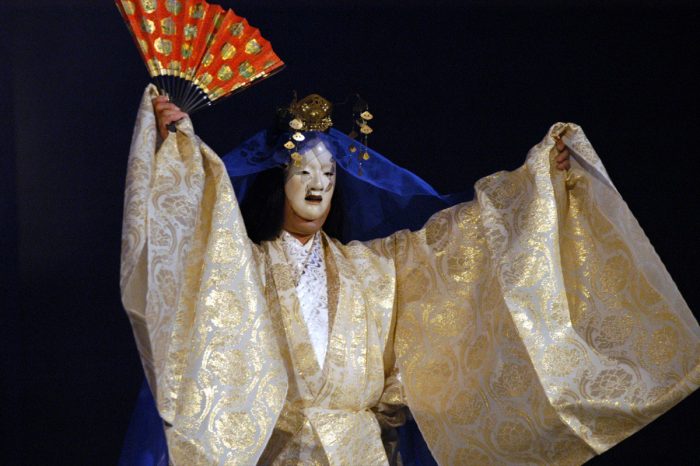 At Urakami Cathedral in Nagasaki, Japan
A woman appears to tell about the tragedy caused by an atomic bomb
Is she Holy Mother or the spirit of the tragedy’s victim? 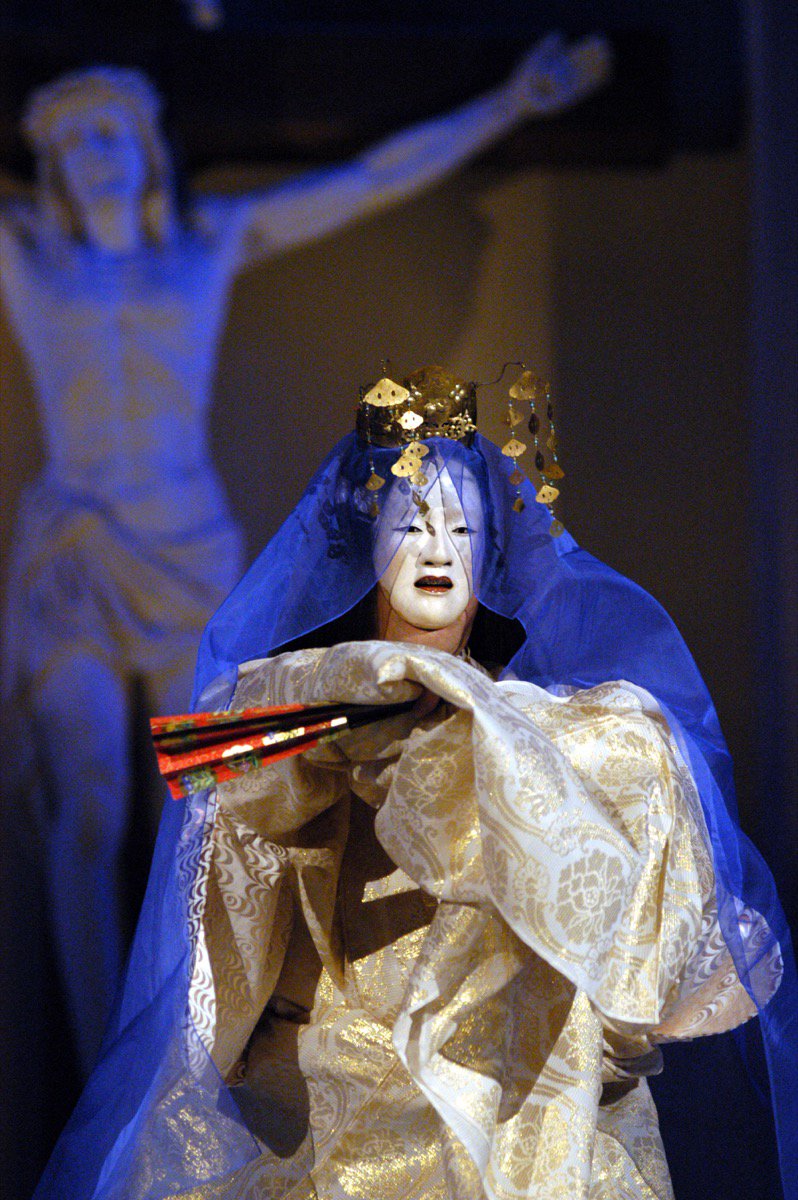 Story: Pilgrims visit Urakami Cathedral in Nagasaki and encounter a priest who talks about the day when an atomic bomb destroyed the city. The entire city was on fire as if it had been the end of the world. Numerous citizens including many Catholics died, and a statue of Holy Mother and the cathedral were burned out. After the war, the head of the statue was found in the rubble and named “Atomic-bombed Mary.”

While a choir fills the cathedral with song, the pilgrims prays for the victims. A woman appears. Is she Holy Mother or the victim’s spirit? She reminds them of the tragedy and shows the mercy of Holy Mother. She tells a story about an unknown Catholic woman who took care of injured victims on the night. She dances, praying for the victims and world piece. She disappears only leaving a single white lily.

The story of Holy Mother in Nagasaki is based on the history of Urakami, Nagasaki. The creation of the piece started as the citizens of Nagasaki asked Noh Master Kanji Shimizu to create a memorial Noh for the victims of the atomic bombing. Urakami Cathedral was built in 1914 finally after the 250 years’ of the persecution of Catholics, but it was destroyed by the atomic bombing in 1945. At the time, numerous Catholics died, and survivors worked day and night on rescue. Since its premier at the cathedral in November, 2005, Holy Mother in Nagasaki has been performed 17 times including twice in the memorial service. In 2015, in commemoration of the 70th anniversary of the atomic bombing, it was performed in a few cities including New York, where the Treaty on the Non-Proliferation of Nuclear Weapons was being discussed, and Nagasaki, where the Pugwash Conferences on Science and World Affairs was being held. In Holy Mother in Nagasaki, local choirs are encouraged to play the role of choir, which offers educational opportunities for them to experience Noh and think about world peace. 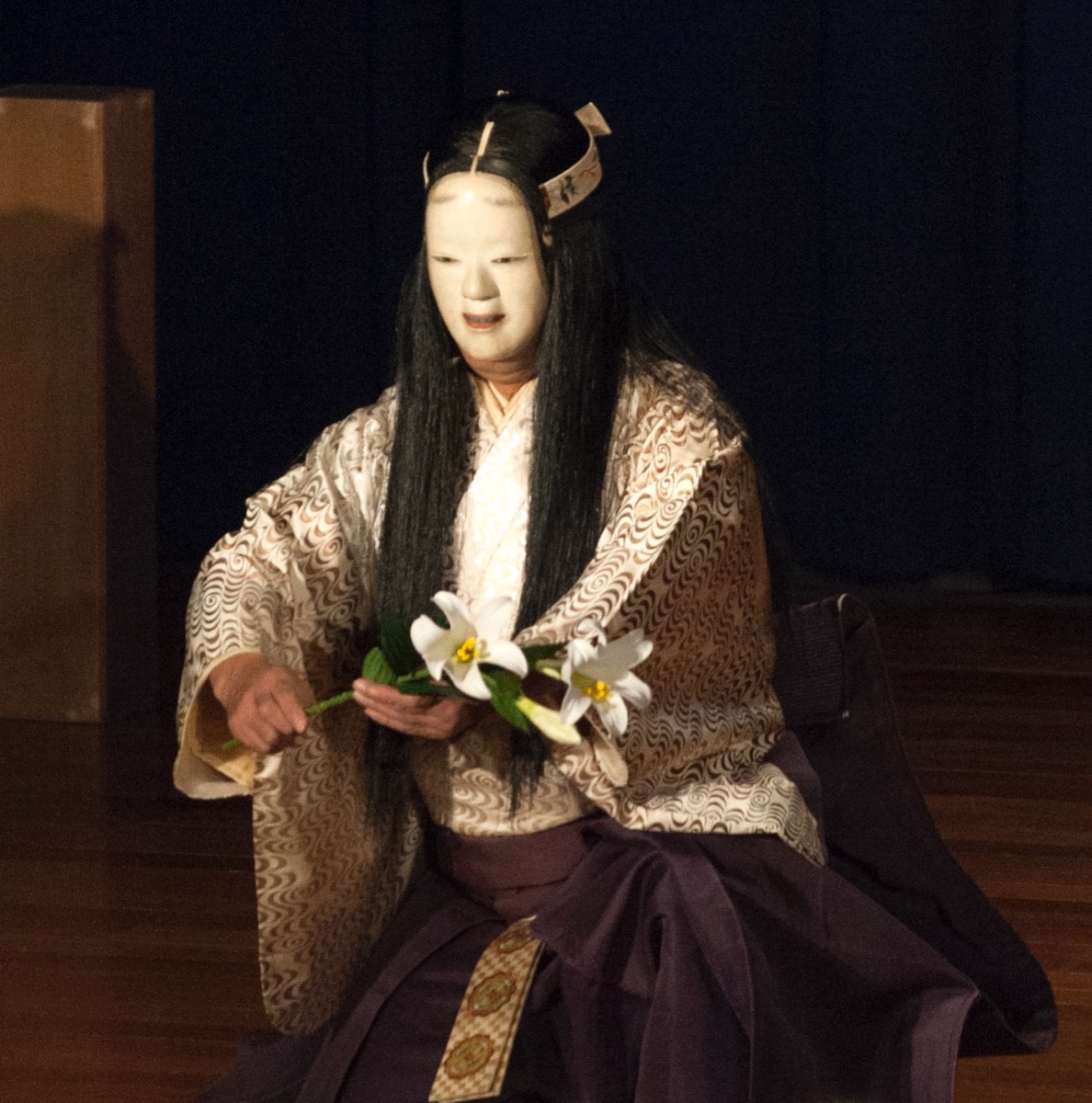 Tomio Tada (1934-2010) is an immunologist and writer. He wrote a number of contemporary Noh plays.Kanji Shimizu (1953-) is a Noh master belonging to The Tessen-Kai Noh Theater Association. Not only does he perform classical repertory but he also works on the creation of contemporary Noh plays. He often collaborates with contemporary theater, dance, music, and foreign traditional performing arts such as Kunqu in China.